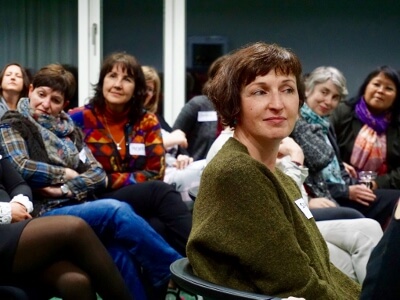 HIP Women’s Forum was thrilled to have Uta Anders speak to a group of 47 women on International Women’s Day, March 8, 2016 at the ADAC Office in Heidelberg.

The event started with the registration in a welcoming atmosphere, where beverages and food were provided. The food was catered by HIP Member Juliah Rais-Morres. Some enjoyed a glass of prosecco, while others had delicious food and said hello to each other.

After networking for a while, the women found themselves a seat with a little scented candle on it, a welcome gift from Cheryl Sweeney of Yankee Candle. Every woman introduced herself by telling her nationality, what she did for a living and what brought her to the Rhine-Neckar Region and to HIP.

Then the guest speaker Uta Anders was introduced to us by HIP Steering Committee Head Cheryl Sweeney and Uta told us her career story at the company ThyssenKrupp, where she works as the Chief Financial Officer (CFO). Throughout her story, she touched on themes of hard work, opportunity, living abroad and being comfortable where she lived.

Last year, as a lot of refugees started arriving in Europe and at the Patrick-Henry-Village (PHV) in Heidelberg, Uta wanted to help and had the idea of doing a project there. A long time practitioner of yoga in a local yoga studio, she decided to organize a weekly yoga/movement class for women and girls at PHV.

Uta asked for help from the Diakonisches Werk Heidelberg, the yoga studio where she usually did classes and her friends. Through Facebook she was able to coordinate teachers and helpers to show up at the assigned room to conduct the moving/yoga classes.

Uta hung in there, kept handing out flyers and showing up with her group. Around the third or fourth time, women and girls came and really enjoyed the chance to move, relax and dance. The effort, at first known as “Yoga For Help” transitioned into “Yoga for Hope” which explains the feelings of hope and community that is created through this activity. And not just for the women and girls, but for Uta and her friends as well.

Uta talked about the achievements she made through ‘Yoga for Hope’ and how much happiness was added to her life by the people who she met at the yoga group. Uta said that nothing could give you more joy then the hope and happiness you give to the people around you.

The women at the event were then invited to discuss and share any ideas they had for the refugees and for helping other women.  After more food, beverages and networking a wonderful evening came to an end and left all the participating women with a lot of fulfillment and good thoughts.

The imprint (Impressum) and Privacy Declaration (Datenschutzerklärung) are in German language, as our organisation is located in Germany.

Do NOT follow this link or you will be banned from the site!
This website uses cookies to offer functions for forms and the membership-newsletter. Social media functions are implemented without cookies and data transfer. However, if you go to social media platforms they may store cookies on your computer and may obtain data from you. They might consolidate them with data they collected on other platforms.

Any cookies that may not be particularly necessary for the website to function and is used specifically to collect user personal data via analytics, ads, other embedded contents are termed as non-necessary cookies. It is mandatory to procure user consent prior to running these cookies on your website.